Tesla Solar Roof gets New Competition in Half Price Tesla Solar Roof gets New Competition in Half Price

Tesla’s latest project incorporates textured, undoubtedly attractive Solar panels that look like standard shingles. While the corporation has tried to penetrate into the mainstream with this new product, it has had a difficult time selling it, owing to its high price tag. According to Southern Energy Management, an average 8kw Solar Roof will have roughly 460 solar shingles, which means there are 460 electrical connection points on your roof.

A standard solar system of this size, on the other hand, would include roughly 25 solar panels and 25 connections. Then there’s the issue that all those tiny shingles are prohibitively expensive. Last year, Tesla raised the price of its Solar Roof dramatically due to a reported roof complexity issue. At the same time, Tesla’s technology has advanced significantly, with their solar shingles now capable of producing 22% more energy. 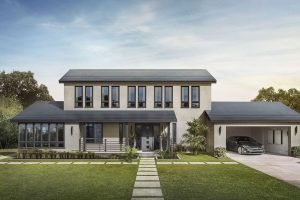 While Tesla’s Solar Roof effort has gotten a lot of attention, the concept of manufacturing solar shingles that can be installed in the same way as traditional asphalt shingles isn’t new. CNBC recently noted that “companies ranging from Dow Chemical Company to the now-defunct BP Solar have given the solar shingle a go,” but “many of these products are no longer on the market.”

These firms, like Tesla, were stymied by high manufacturing and installation costs, which prevented them from achieving mainstream commercial success. However, Tesla now has a new rival, and it has the potential to revolutionise the game. GAF Energy has introduced a new solar shingle that is almost half the price of Tesla’s Solar Roof . GAF energy is a division of Standard Industries, which controls a number of roofing companies, giving it a significant competitive advantage over other Solar Roof  enterprises.