Many agencies are monitoring the oil wells in McKenzie County. The County Sheriff’s Office responded to the fire on Thursday afternoon which is north of Charlson, near the Missouri River. Officials said that the reason for the fire is unknown.

Officials said that nobody had reported injuries due to the fire. The fire does not improve any threat to the environment. The fire is being monitored by Petro Hunt, Wild Well Control, Keene Fire Department, McKenzie County Rural Fire, U.S. Forest Service, and McKenzie County Emergency Management. 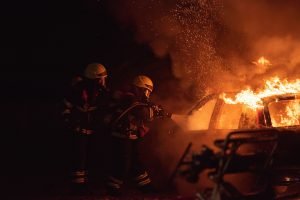 Officials said that the fire was contained to the well, and no surface grassland or groundwater resources were affected. An area and road closure has been put in place near the fire until further notice. Residents and grassland visitors are asked to avoid the area. Emergency responders are free from the closure.The Forest Service is working with the oil permit holder to ensure a suppression plan is in place if the incident triggers a wildland fire. Recently the North Dakota Department of Environmental Quality reported two saltwater spills occurred in McKenzie County. Tallgrass Energy reported a spill from one of its pipelines.

The company estimated 850 barrels or 35,700 gallons spilled, affecting private property about 7 miles south of Watford City. Saltwater is known as produced water or brine in the oil fields, and it can render land infertile when it spills. It’s a byproduct of oil production, typically transported by truck or pipeline from an oil well to a disposal site. The reason for the spill is unknown. A lightning strike is to blame for a separate incident that caused a fire and 820 barrels or 34,440 gallons of saltwater to spill at a disposal site about 5 miles south of Keene.