Since 2018, Suttle Stone Quarries has reduced its Carbon footprint by approximately 400 tonnes of Carbon dioxide equivalent (tCO2e), with its most recent initiatives saving nearly 100 tCO2e in 2021. It used grant money from Low Carbon Dorset to install 120 solar panels at its Worth Matravers quarry, which will power the quarry workshop, security, and fixed electrical equipment. The quarry’s 160kW stone crusher engine, which was recently updated from diesel to electric, is also powered by solar.

The company also replaced diesel-powered equipment with energy-efficient alternatives, switched from heating oil to renewable electricity at its quarry office, and replaced electrical fittings with energy-efficient alternatives. The Suttles firm, which also comprises Suttle Projects and employs 120 people, has invested in additional efforts to cut greenhouse gas emissions over the last two years. It operates a fleet of 19 electric and hybrid vehicles and equipment and has been awarded silver certification by the Fleet Operator Recognition Scheme. 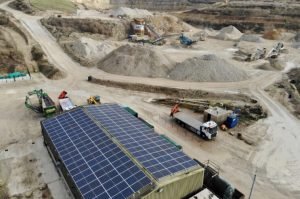 As our electricity usage peaks during the day, it made sense for us to invest in solar power, which not only helps us save money on energy but also contributes considerably to our goal of Carbon neutrality. Despite the fact that we have made significant adjustments in our business to far, we recognise that these are only the beginning of our journey to becoming Carbon neutral.

The continuous rollout of HVO, a highly clean and low CO2 fuel, across our LGV and plant fleet is the next project that will help us accomplish those targets. Suttles has four locations in Dorset: two in Purbeck, one in Mannings Heath, and one in Hamworthy’s Dawkins Road. Crushed limestone and aggregates are sold and delivered for architectural, landscaping, and civil engineering purposes.