Shell announced on Wednesday that it has inked a deal to buy power from “the world’s largest offshore wind farm.” The 15-year power purchase agreement covers 240 megawatts from Dogger Bank C, the third and final phase of the Dogger Bank Wind Farm, built in waters off the coast of northeast England. The agreement builds on a prior agreement to buy 480 MW from Dogger Bank A and B, bringing the total offtake to 720 MW.

On Wednesday, Dogger Bank Wind Farm stated that Centrica Energy Marketing & Trading, SSE Energy Supply Limited, and Danske Commodities had agreed to 15-year power purchase agreements for Dogger Bank C. When the third phase of the wind farm goes into commercial operation, the commercial power agreements will give away to sell the green energy generated into the GB electricity market. Dogger Bank A and B are a joint venture between Equinor, SSE Renewables, and Eni, with Equinor, SSE Renewables, and Eni having 40%, 40%, and 20% shares, respectively. 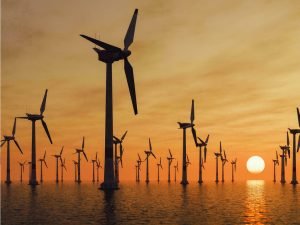 Eni also announced this month that it would purchase a 20% investment in Dogger Bank C, with Equinor and SSE Renewables each having a 40% stake. This transaction is expected to close in the first quarter of 2022. Dogger Bank will be the world’s largest offshore wind farm after all three phases are completed, planned for March 2026. Despite signing renewable energy partnerships, Shell remains a significant role in the oil and gas industry.

It has committed to becoming a zero-emissions energy company by 2050. In February, the company verified that overall oil production peaked in 2019 and that total carbon emissions peaked in 2018 at 1.7 metric gigatonnes per year. Shell was ordered by a Dutch court earlier this year to take far more aggressive steps to decrease its carbon emissions, to reduce them by 45 percent by 2030 from current levels.