Railway Natural Gas Rule by Trump to be suspended by Administration Railway Natural Gas Rule by Trump to be suspended by Administration

Federal regulators have suggested delaying the implementation of a Trump Administration rule that would have allowed railroads to transport liquefied natural gas while they investigate the potential safety risks. The government, endorsed by both the natural gas and freight rail industries, had already been put on hold after it was challenged in court by multiple environmental groups and 14 states. Due to the uncertainty surrounding the rule, companies have been hesitant to invest in the required specialized rail tank cars, according to the federal Pipelines and Hazardous Materials Safety Administration.

As a result, no shipments of the flammable and odorless liquid known as LNG have been handled by railroads since the rule was implemented. In addition, the rule would have required enhancements to the approved tank car design. For example, it includes a thicker outer tank composed of steel with improved puncture resistance permitted for shipping other flammable cryogenic liquids, such as liquid ethylene and liquid ethane, for decades. On the other hand, environmental groups argued in their lawsuit that the new railcars, which have yet to be built, are untested and may not be able to withstand high-speed impacts. 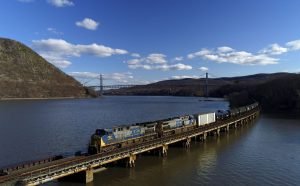 It increases the risk of an explosive train derailment along rail lines that run directly through the heart of most cities. “We don’t believe that LNG by rail should have ever been authorized in the first place, so we look forward to the authorization being suspended,” said Bradley Marshall.

He is a senior attorney with Earthjustice. The Biden Administration decision to suspend the regulation was likewise applauded by a spokesman for California Attorney General Rob Bonta. Bonta’s office stated that he would continue his predecessor’s challenge to the law because he believes “this rule is illegal” and that authorities failed to assess all environmental concerns adequately.