Venezuela oil exports fell to 593,550 barrels per day in May as a result of an outage in its main producing region and a lack of diluents to produce exportable grades, documents, and tanker tracking data showed. The OPEC member’s oil shipments were stable at around 700,000 barrels per day between February and April, but a gas leak that hit state-run Petróleos de Venezuela, S.A’s upgraders, and lower availability of light crude and refined products to dilute the Orinoco belt’s extra heavy oil knocked exports last month.

Petróleos de Venezuela, S.A and its joint ventures shipped a total of 27 cargoes of crude and fuel in May, a 14.5% decline from April, but an increase of almost 28% versus exports in the same month of 2020, company documents and Refinitiv Eikon data shows.Venezuela oil production fell to 445,000 barrels per day in April with its main grade price, Merey crude, at around $46 per barrel that month, according to secondary sources quoted by OPEC. 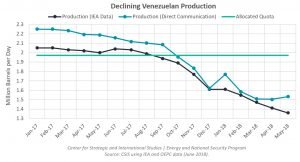 The nation’s output bounced in May to about 600,000 barrels per day due to an increase in extra-heavy oil production according to sources, but gas and power outages and an acute scarcity of diluents affected Petróleos de Venezuela, S.A’s ability to produce exportable blends, according to a source and company documents.

Petróleos de Venezuela, S.A, and Venezuelaoil ministry did not immediately reply to requests for comment. Exports to Cuba, Venezuela most important political ally, rose to 67,000 barrels per day from 54,000 barrels per day the previous month in six cargoes of crude and fuel oil. Venezuela fuel imports also increased slightly, to some 24,000 bpd, after the arrival of the first diesel purchase since November, which is expected to ease an acute scarcity mainly caused by insufficient domestic refining.