According to AAA, California gas prices averaged $4.676 on Sunday, breaking the previous record of $4.671 for regular fuel established in October 2012. On Friday, it came within a cent of breaking the record, and on Saturday, it was tied for it. Gas costs in America’s most populous state are the highest in the country. On Sunday, the national average fell to $3.413. According to AAA, significant rainstorms in Northern have slashed production capacity, which has then spread to Southern California, much like Hurricane Ida did in Louisiana.

Jeffrey Spring, Corporate Communications Manager of the Automobile Club of Southern California said, “It’s a bit of a supply crunch we have right now, there’s nothing major, until the refineries in Northern California can get back up to full production capacity.” In other locations, such as Northern Humboldt County, where the average price was $4.968 on Sunday, prices are approaching $5. 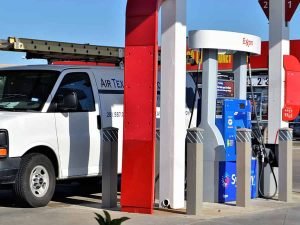 The price of a gallon of gas in the Bay Area has risen to more than $4.80. According to Doug Shupe, a spokeswoman for AAA, while California are used to paying more for gas, the price has recently risen significantly. The chief causes of the price increase, according to Shupe, are increasing crude oil prices and pent-up demand from the pandemic. Prices at the pump usually drop after Labor Day because people have returned from their summer vacations. The children have returned to school.

As global fuel demand grows and providers are unable — or unwilling — to supply more oil, gas prices have been steadily rising throughout the year. Despite a 65 percent increase in oil prices this year, US oil production is around 14 percent lower than it was at the end of 2019, when Covid erupted.