Natural Gas futures in New York surged to their highest settlement price in 12 years as global gas supply constraints stoked fears of shortages in the United States. Low supplemental supplies in the United States have generated concerns about future shortages as demand for furnace fuel rises in the northern hemisphere as the winter heating season approaches. On the New York Mercantile Exchange, gas futures surged 9.5 percent to trade at $6.312 per million British thermal units, the highest closing since December 2008. 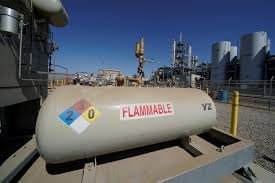 Traders and brokers are “definitely considering that there is a high potential for the market to move into what we would call gas-rationing pricing, which simply means that you have to preserve gas in your inventories to meet deliverability needs,” according to Nina Fahy, head of North American Natural Gas analysis at research firm Energy Aspects Ltd. Despite benign weather forecasts for the winter season, many are ready for a severely cold winter that will deplete the U.S. supply.

On Monday, the Bloomberg Commodity Spot Index hit an all-time high as a global revival in raw material demand collided with supply limits. The squeeze has been exacerbated in Europe and Asia, where gas and power prices have reached new all-time highs. In the United Kingdom, benchmark gas prices hit a new high on Tuesday, rising 23 percent to almost $42. According to BloombergNEF, gas output in U.S. fields, excluding Alaska, fell to 91.2 billion cubic feet on Tuesday, the lowest level since early September. In addition, government records reveal that nationwide inventories stored in storage to supplement pipelined supplies over the winter are 15% lower than a year earlier.