The city council of New York passed a ban on natural gas in newly constructed buildings in a vote on Wednesday, following places like San Jose and San Francisco in making similar commitments to decrease emissions. As a result of the switch away from natural gas, electric stoves and heat pumps will be used, reducing carbon emissions. Buildings account for over 40% of national carbon emissions and more than half of emissions in New York City.

Buildings that are seven floors or shorter by the end of 2023 are subject to the new prohibition, which received 40 votes in favour and seven votes against it. Buildings that are taller have a further four years to comply. Hospitals, laundromats, and crematoriums are among the exceptions in the bill. The legislation also establishes two studies to be conducted by the Mayor’s Office of Long-Term Planning and Sustainability. 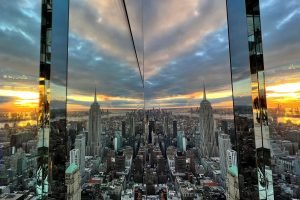 The first will look at the use of heat pump technology, while the second will look into the bill’s influence on the city’s electrical infrastructure. The gas industry’s fierce opposition to natural gas bans hasn’t deterred towns around the country from pursuing the initiative. At least 42 communities in California have passed ordinances restricting the use of gas in new construction, while Salt Lake City and Denver have announced plans to transition to electric vehicles.

The city of Ithaca, New York, has even committed to eliminating natural gas consumption in all buildings, not just new ones. However, the ban’s passage in New York City, the country’s largest city, sets a high bar for other communities attempting to reduce carbon emissions in the fight against climate change. New York City’s efforts to restrict natural gas in new buildings may have sparked legislation to extend the ban to the entire state.