As they make their way to their eventual home southwest of Lompoc, deliveries of the giant blades for wind turbines have garnered concerns and second looks. On 2,970 acres off San Migueltio Canyon Road, the Strauss Wind Energy Project, an associate of BayWa r.e. Wind, LLC, is under construction. The project will have 29 wind turbine generators with a height of up to 492 feet and support facilities.

San Luis Obispo County residents were drawn to the oversized cargoes as they made their journey south lately, and they drew groups of spectators as they lumbered past Lompoc. Each wind turbine generator blade has a length of 220 feet and is mainly made of fiberglass. The massive blades will be transported on a specially constructed vehicle with lift capabilities, allowing them to pass through some places. The first blade passed through Lompoc on September 24, with others following the following week. 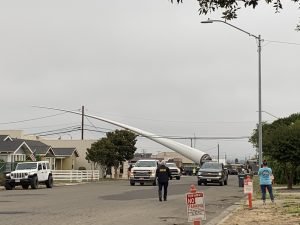 While the wind farm is located outside Lompoc, a portion of the route will pass through the city. Residents and businesses have been informed that more than 200 huge cargoes will arrive in early December. These blades will be delivered by trucks from West Ocean Avenue to South F Street, Cypress Avenue, I Street, and San Miguelito Canyon Road on weekdays between 9 a.m. and 4 p.m. Most loads will result in only a minute or two of traffic delays.

Certain cargoes will necessitate road closures of up to an hour and detours as specified in the delivery and blade route maps. The Strauss commercial wind farm will generate roughly 98 megawatts of power, enough to power nearly 43,000 houses for a year. For more than a decade, a commercial wind farm has been planned for the site. Still, it has faced opposition from residents of the rural Miguelito Canyon and members of the Audubon Society concerned about the impact on various bird species.