Largest Solar Farm will be Built in Northwest Indiana

Largest Solar Farm will be Built in Northwest Indiana

Norm Welker has been spending hours every day in the cab of his combine for the past week. He gets up with the sun and walks up and down his 1,000 acres in northwest Indiana, as he has done for decades. But this time, he was particularly interested in how the light reflected off the corn stalks and peered through the trees at the boundary of his property.

He and his family will harvest maize for the last time this year. Welker, on the other hand, will continue to be a Farm, but this time he’ll be Farm the sun.Welker isn’t alone: many of his neighbours have agreed to lease their land for what will be the country’s largest solar Farm, right here in Indiana. 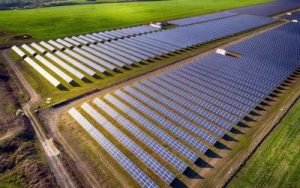 This project, a collaboration between Indiana and Doral Renewables LLC of Israel, is estimated to contribute $1.5 billion into the state over the next five years. It will also result in significant financial gains for local landowners as well as the counties of Starke and Pulaski, where it is located. There will be three stages to the project’s completion.

In October, the business broke ground on the first phase in a ceremony that included Gov. Eric Holcomb and Israel’s ambassador to the US. All three phases should be operational by 2024, according to plans. The effort began around two years ago, with the goal of reaching out to landowners, educating them, and addressing their queries. Nick Cohen, president and co-founder of Mammoth Solar, believes this is critical. This step was especially essential for the corporation because it was entering an area where previous ordinances virtually outlawed wind energy, according to Cohen.