Illinois Gov. J.B. Pritzker signed a landmark law this month that would transition the state to 100 percent clean energy by 2045, with benchmarks along the way, at a time when the Midwest is being hammered by more severe storms owing to climate change. While the initiative has mostly gone unnoticed by the national media, it is notable for three reasons: Illinois is the first state in the coal-rich Midwest to reduce carbon emissions; the plan has bipartisan support, and it includes programs to assure economic and racial fairness.

The Climate and Equitable Jobs Act only had a chance of passing because Democrats control both houses of the state Legislature and the governorship. Still, the Republican response suggests a possible partisan thaw on climate change. Perhaps this is because the local effects of climate change are becoming increasingly difficult to ignore. According to the state climatologist’s office, Illinois‘ average temperatures have risen by 1 to 2 degrees Celsius during the last 100 years, and yearly rainfall has climbed by 12 to 15%, with 2-inch rain days increasing by 40%. 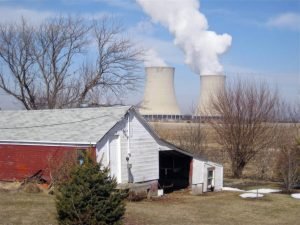 Darin said, “We had some very, I would say, out-of-step rhetoric opposing the bill, but we no longer hear anyone doubting the science of climate change. So even the most conservative objections to the bill did not question the science and the urgency of acting on climate. And, in fact, most Republican objections were couched in statements of support for renewable energy.”

While progressive coastal states like California and Oregon have already enacted similar renewable energy mandates, Illinois‘ neighbors have less ambitious goals. For example, Indiana wants to get 10% of its energy from renewable sources like solar and wind. Illinois can afford to be more proactive since it has the nation’s largest nuclear energy fleet, which allows it to stop burning coal and natural gas for power even if renewables aren’t ready to satisfy 100 percent of demand.