Researchers have long suspected that Mars was once home to several rivers, lakes, and oceans. They have been able to detect ice, and some salty lakes, in the planet’s polar regions; finding water in other areas has proved elusive.

Scientists found evidence of a large water reservoir just a few feet below the surface of the Red Planet Valles Marineris canyon system. Located along the equator of Mars, the Valles Marineris is one of the Solar System’s largest canyons. The massive tectonic chasm measures over 2,500 miles (4,023 kilometers) long and 5 miles (8 km) deep. NASA estimates that if the Valles Marineris were on Earth, it would stretch across the continental United States from New York to California. 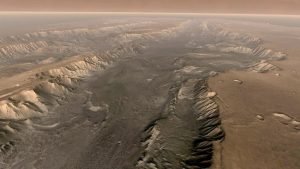 The discovery was made using data collected by the ExoMars Trace Gas Orbiter (TGO), circling the Red Planet since 2018. TGO, a collaboration between the European Space Agency (ESA) and the Russian Federal Space Agency (Roscosmos), is designed to detect the presence of gases such as methane and water vapor in the Martian atmosphere. The researchers say that the orbiter’s Fine Resolution Epithermal Neutron Detector (FREND) found an unusually large amount of hydrogen, a measure of water content.

The scientists, who revealed their findings in a press statement on December 15, 2021, suspect the water is in the form of ice. If true, it could make up as much as 40 percent of the area’s near-surface material. However, FREND could also detect water chemically bound to minerals in the soil. The team plans to analyze data to determine the water’s form. Regardless of the outcome, they believe the discovery is a game-changer for potential human missions to the Red Planet.