French authorities were racing to clean up an Oil Spill approaching the island of Corsica on Saturday, launching an anti-pollution plan. This plan to prevent the slick from reaching sunbathers on the coast.The spill was spotted by the French navy during an exercise carried out from the Solenzara air base in Ventiseri, Corsica. Officials had detected two oil slicks over 19 nautical miles, which were drifting about 5 nautical miles from Corsica’s east coast, between Aléria and Solenzara, France’s Mediterranean Maritime Prefecture said in a statement.

Pollution experts concluded that was a heavy-grade Oil Spill and it is likely the result of a degassing, which involves the release of any gases left in fuel tanks or crude oil tanks after they’ve been emptied.The size and nature of the products involved do not allow for natural dilution and require specific anti-pollution units and equipment. Christine Ribbe, a prefecture spokeswoman told French radio station France Inter on Saturday morning said that Some materials are visible up to 800 meters from the coast. 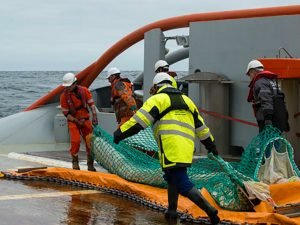 They fear that some of this pollution will reach the Corsican coast today.France’s environment minister Barbara Pompili said she would visit the site on Saturday with maritime minister Annick Girardin. Pompili said France’s maritime police had opened an investigation into the spill. Pompili thanked the professionals mobilized to fight against this environmental scourge.

Authorities in the Haute-Corse department, the northern part of Corsica, have blocked access to the beaches in the towns of Aleria until Ventiseri and told residents not to touch or collect any Oil Spill they find on beaches. Fishing was also prohibited in the same areas on Friday night.