Earth has a stellar sentry directing the way around the sun, and it’s only the second Earth Trojan asteroid ever discovered. Astronomers observed asteroid 2020 XL5 using the Southern Astrophysical Research Telescope in Chile. A study was published Tuesday in the journal Nature Communications.The author of the study said that the trojans are objects sharing an orbit with a planet, clustered around one of two special gravitationally balanced areas along the orbit of the planet known as

Lagrange points. Lagrange points are regions of space where the gravitational pull from the sun and one of the planets is balanced, said lead study author Toni Santana-Ros, a researcher from the University of Alicante and Institute of Cosmos Sciences of the University of Barcelona. The stable orbit of Earth Trojan asteroids would make them ideal for flybys from future space missions. 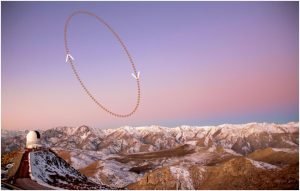 They also added that if they discover more Earth Trojans, and if some of them can have orbits with lower inclinations, they might become cheaper to reach than our Moon. They might become ideal bases for an advanced exploration of the Solar System, or they could even be a source of resources. This is also the larger of the two Earth Trojan asteroids so far, measuring about 1.2 kilometers in diameter. The first one, 2010 TK7, was found over a decade ago, and it’s about three times smaller.

Trojan asteroids have been found orbiting the sun along the same path as planets like Jupiter, Venus, Mars, Uranus and Neptune. Jupiter has more than 5,000 known Trojan asteroids that race ahead of and trail behind the giant planet. The recently launched NASA Lucy mission will be the first to explore some of Jupiter’s Trojans on its ambitious 12-year journey.