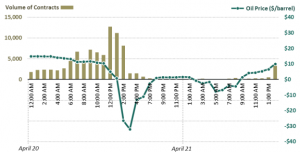 The senior market analyst at OANDA, Edward Moya, said, “Refiners are pumping out a lot of fuel, operating at 91.3% of their operable capacity. The pickup in crude demand has been solid over the past month, but this week showed a little dip. The headline draw of 5.2 million barrels, greater than the expected decline of 2.9 million barrels, but everyone seemed to focus on the surprising massive builds with gasoline and distillate inventories.”

The increase in gasoline stockpiles represented the failure of bullish market expectations following Memorial Day weekend, which traditionally marks the summer driving season. The EIA report showed that weekly gasoline supply, a proxy for demand, fell to its lowest level since February, adding to the bearish demand signals.