Lavender flecks are beginning to adorn the low-bush Blueberry crops here on a slope along Route 17 a little early this season. But that isn’t an essential piece of information. Instead, the 10,608 solar-electric panels or modules that construction crews install on metal racks traverse nearly 12 acres of south-sloping fields have local farmers talking.

This land is about to go through a one-of-a-kind agricultural trial to evaluate how well sunlight can produce both energy and blueberries in the same area. This is Maine’s first commercial-scale dual-use or agrivoltaics project, which refers to solar energy generation combined with agriculture. Last month, a group of about a dozen farmers saw the facility, which Boston-based BlueWave Solar and Navisun LLC are building. This Massachusetts solar power company will own and run it. 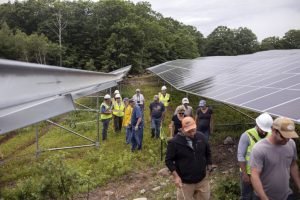 Agrivoltaics is a novel concept for growers of Maine’s famed wild Blueberry harvest, hampered by poor pricing, drought, and labor shortages in recent years. The study will show how valuable agricultural land can host solar arrays and crops, potentially reducing conflict between competing land users. As they climbed the slope, these farmers thought putting a solar farm on some of their lands may help them overcome their difficulties.

What policy changes would Maine politicians have to consider to foster the expansion of agrivoltaics in the state? The blueberries growing beneath the solar panels are at the crossroads of two Maine climate change priorities: support renewable energy development to minimize greenhouse gas emissions and safeguard agricultural land to improve the local food supply. A newly formed stakeholder group comprised of state and municipal authorities, conservation interests, and farmland supporters is focusing on these seemingly opposing agendas.