A Bel Air mega-mansion marketed as the most expensive home in America was sold at auction Thursday for less than half the asking Price and less than a quarter of the intended value. The property, anointed “The One” by its developer Niales Niami, sold for a record-setting Price of $126 million – the highest amount ever spent at a home auction.

It will be the second-highest total spent on the home, after the $238 million spent on a New York City penthouse by Ken Griffin in 2019. Once auction costs and commissions have been added, the purchase will be approximately $141 m. This is a considerable drop from the $295 million asking Price before the auction.The buyer’s identity was not revealed until Sunday when The Los Angeles Times reported that Fashion Nova CEO Richard Saghian was the winning bidder. 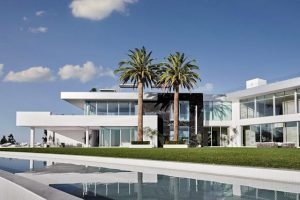 The auction opened online Monday, and only a few offers were made until the final minutes. The total cost of the purchase rose to $141 million with the 12% auction fee.Niami once referred to the property’s worth as $500 million. Still, several delays, complications in the construction, and default on more than $100 million in loans reduced the suggested Price by a staggering amount. Production on the home began more than a decade ago.

It included a great list of amenities across the property’s four acres, including 21 bedrooms, 42 full bathrooms, and seven half-bathrooms, a bowling alley, a nightclub – equipped with a VIP lounge, a salon and spa, five pools, a 10,000-square-foot sky deck, 10,000-bottle wine cellar, a movie theater, outdoor running track, a putting green and a tennis court amongst others.