Almost 850K People are Without Power Due to the Storm Almost 850K People are Without Power Due to the Storm

On Monday, a Power winter storm bringing heavy snow to the South and mid-Atlantic snarled traffic, killed five people, knocked out roughly 850,000 people’s Power, and shut down much of the federal government in Washington. By the time the storm ended Monday, AccuWeather predicted 6-12 inches of snow in the core of the storm, with locally greater amounts. That much snow was expected to fall from eastern Virginia to Maryland’s eastern shore, as well as much of Delaware and southern New Jersey.

There were multiple reports of at least 10 inches of snow in Virginia, Maryland, New Jersey, and North Carolina as of mid-afternoon Monday. A winter storm warning has been issued for the area until 4 p.m. EST Monday, according to the National Weather Service. Wind gusts of up to 35 mph were expected, and travel would be difficult due to the hazardous conditions, according to the weather service. 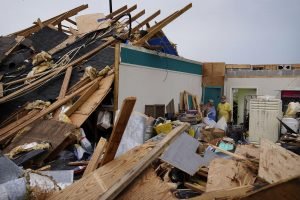 According to the Weather Channel, 2 inches of snow per hour might fall in certain regions, and thundersnow has been observed in at least five states. Weather-related deaths have been documented in five cases. WVLT reported that a 7-year-old child died after a tree fell on her home near Townsend, Tenn., roughly 30 miles southeast of Knoxville, due to heavy snow. According to CBS 46, a second child, a 5-year-old boy in Georgia, was killed after a tree fell on a residence near Atlanta in DeKalb County due to heavy rain and severe wind gusts.

According to NBC, three more individuals were killed when an SUV and a snowploughs crashed in Montgomery County, Maryland. Hundreds of traffic accidents and stalled vehicles occurred as a result of the storm: By 12:30 p.m. local time, Virginia State Police had reported 559 traffic crashes and 522 stalled or trapped vehicles across the state.