On Tuesday, tropical storm Nicholas brought severe rain and power outages to Texas but inflicted minor damage to U.S. energy infrastructure than Hurricane Ida earlier this month. After hitting a session high of $74.28 a barrel, Brent crude finished up 9 cents to $73.60 a barrel. After reaching a high of $71.22, U.S. West Texas Intermediate (WTI) crude finished 1 cent higher at $70.46. According to the Bureau of Safety and Environmental Enforcement (BSEE), more than 39% of petroleum and natural gas production in the United States Gulf of Mexico remained stopped on Tuesday.

Nicholas hit Texas on Monday and was expected to hit Louisiana on Wednesday, bringing further flooding and heavy rains to the Gulf’s oil refineries. Heavy winds forced Royal Dutch Shell to halt production at an offshore oil site. In addition, due to inclement weather, vessel movement at some energy centers was suspended. Nicholas is the second significant storm to hit the Gulf Coast in recent weeks, delivering torrential rainfall and power outages to the Deep South. 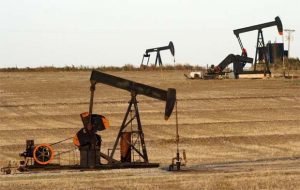 Despite this, most Texas refineries were up and running, and Texas utilities were working to restore power to consumers who had been without it. In addition, the Colonial Pipeline, the country’s largest petroleum pipeline, has partially reopened after being shut down due to a power failure earlier in the day. Oil fell during the session as new data from the U.S. Labor Department revealed that inflation was slowing and concerns about the storm’s impact on the energy industry dissipated.

The International Energy Agency (IEA) stated on Tuesday that after three months of declining global oil demand, the introduction of COVID-19 vaccines should reignite the appetite for oil that has been dampened by pandemic restrictions, particularly in Asia. According to the IEA, demand would rebound by 1.6 million barrels per day (BPD) in October, with growth continuing until the end of the year.